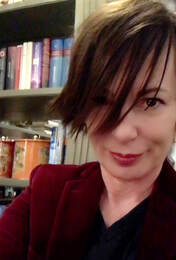 Peter and the Wolves and Why Labelle Matters press inquiries,
contact Gio:   giodescartes@gmail.com

Hi there.  In 2020, I officially became an author. A memoir about my adventures with infamous Cleveland musician Peter Laughner, PETER AND THE WOLVES was released, and WHY LABELLE MATTERS, about the Afrofuturist rockstar band of three (Patti Labelle, Nona Hendryx, and Sarah Dash) was finished and prepped for this year's publication (March, 2021 on the University of Texas Press). I'm thrilled to finally be in print and immensely grateful to both Smog Veil Press and UT Press, and the people who kicked in their talents to make both books sing. Thankful too for the praise I've received from fantastic authors and teachers, all whom I admire greatly, quoted on each book's page: PatW, and WLM.  I have lots of new songs and music happening as well, to be unveiled later this year. A Judee Sill cover song recorded with Ariel Westberg, "The Donor", produced by Nosiecastle III. And a new short film shot a while ago that I wrote and directed, le cœur en cage. Finally got around to doing an edit during lockdown.

I would have been overjoyed to see many of you on the reading and performance tour I had planned in 2020 for Peter and the Wolves. I look forward to the tour sometime this summer, coinciding nicely for a presentation of both books, after things settle and we've been safely vaccinated. Some of us are quite nervous about being vaccinated for Covid-19 and with good reason; especially the Black community, many of whose grandfathers and male relatives suffered as guinea pigs in the notorious 1930s Tuskagee experiment. I believe once Biden, Kamala, and the new administration are securely holding the reigns of government, once they have weeded out all the rats, that is, vaccine distribution will ramp up and we'll finally be on a road to recovery.

We're currently experiencing  so many  levels of distrust, with the systemic racism resulting in the terrorist occupation of the Capitol proving how untrustworthy of a country are these dis-united states. The Capitol siege showed us, in glaring detail, how even the lowest of animals, as long as their skin is white, enjoy undue privilege—even when committing heinous acts of domestic terror.  Forgive me for insulting animals. People have elected Republiklan officials who are currently trying to spin away this terrorist attack by equating it with BLM protests against white cops who murder innocent Black folks, while staring into the camera lens of the world. Meanwhile, their own Republiklan supporters smear feces on the walls of Congress, killing cops and threatening to kill other elected officials who don't agree with them. They ask us to have sympathy for a woman who was shot and killed while committing an act of terror on the U.S. Capitol? This, from people who have no sympathy for a woman who was shot and killed while sleeping peacefully in her own bed? What more can one say?

I thank every human who joined in with Her Majesty Stacey Abrams to bring us Georgia—Rev. Warnock and Jon Ossoff—a victory we all should have been celebrating in the streets,  eclipsed by a domestic terrorist attack exposing white racist depravity for all the world to witness. The shame of it stings... but those that believe in the truth and who live by it will not bear the shame. History will not be kind to the treasonous.

All pointing to why I've been quiet on this website during these last 4 years.  The  events that have occurred under mini-Mussolini have left me nearly speechless. I didn't imagine it possible to sink lower than separating young children from their parents and locking them in cages, forcing them to sleep on concrete floors with no one to help or comfort them. Many of these children have disappeared. Where are they now? Yet their fate has been trumped from our consciousness nearly every week by a new atrocity. May the perpetrators of these child separations be dragged off to the Hague and tried for Crimes Against Humanity. We are demoralized and exhausted by the utter evil this petulant child and his cabal have wrought upon this country; a country utterly destabilized by the asset puppets Putin and his thug oligarchs have boosted into the highest levels of our government. He who shall not be named made Putin an ecstatically happy despot. It's going to take hard hard work for us all to 'build back better', in the words of our new and humble leader. We've witnessed the closest call America has ever experienced to a full-on fascist takeover, and we'll be reeling from it for quite some time. Going forward, let's all  demand that the media stop giving so much air to the fascists. There are rats inside the house, and the house needs a deep fumigation which cannot happen without the assistance of the Fourth Estate.  It's time all the pundits and news-heads step up into serious pest control—STOP promoting fascism by pumping it full of oxygen because of greed over ratings. In order to heal, our wounds need exposure to new, clean oxygen, not fascist air. Stop the framing of poison, apply some wound-care technologies, like TRUTH, for a start. As Toni Morrison says, "Evil has a blockbuster audience; Goodness lurks backstage. Evil has vivid speech; Goodness bites its tongue."  It's time we kick evil's ass and bring Goodness center-stage, with the confidence it needs to stand proud, in all its complexities and valiant beauty. Goodness requires critical thinking. Evil is banal. Easy. Pick up a gun. As if that will solve any problem.

We have to stop equating Goodness with weakness, or we are lost.

Corona — which as of this writing has taken nearly 400,000 American lives due to negligent homicide—will forever be  the crooked crown of a certain naked emperor. He who fiddled while our country burned. Here's a song I wrote and recorded with the Anubian Lights. Written about Bush Jr. in 2006. Imagine!  Bush was a pre-pubescent ballerina in comparison!
About The Plague —by Albert Camus. So many similarities jump out. For instance, the character Cottard, who embraces the epidemic as an opportunity to accumulate wealth (by stealing) while people drop dead around him.  Unlike our despots, even the authorities in the fictional city of Oran must admit to the scope of the deadly plague, finally quarantining the entire city.

I won't launch into a lengthy diatribe here, other than to say #timesup in more ways than one. It's Time for the reckoning—for the guilty to face consequences.  Time for civics to be reinstalled in schools so that our children understand how our government works and how important each American citizen is to our democracy, to our sense of right and wrong.  Time for every voice to be heard. Time for justice, in the name of our dear departed RBG. I guess she knew precisely when to lift-off in order to save her beautiful, noble heart from shattering to pieces.

Camus, whose philosophy presented our human condition as Absurdism, said "There is no love of life without despair of life."  We here in America are funambulists, walking a tightrope between despair and hope. We've reached the apex of absurdism as we witness millions of brainwashed Americans believing the lies of a pack of fascist autocrats, imagining these thugs are their friends while having their pockets picked dry, while being fed the dope of hate and violence, meth and oxycontin. The drugs and the lies have created a cult of raving lunatics—the only faith left them to be found inside the barrel of a gun. They've hijacked Christ and turned him into a bullet.

This cannot stand. There will be no healing without accountability.

What will the next few weeks, few months, years, bring us?  And how will each of us balance on this tightrope? Will we learn to dance across together to a new destination?  I for one will be searching for the beauty and meaning inside all of this heartbreak, this spiritual wreckage.

P.S. The brilliant and personable historian and teacher Heather Cox Richardson continues to save my sanity, the voice of reason guiding through this fog of spin and delusion. Go to Letters from an American and subscribe (it's free). You won't regret it. I am LIVING for her nightly missives, delivered to my mailbox after she's absorbed the insanity of the day and distilled all the news into a perfect digestive. The woman is selfless, a true giver. Look for her Thursday afternoon videos about American history and how it pertains to our current situation:  Heather Cox Richardson