Hi there friends,
(green is for links)
To begin: A shout-out to Stephanie LaCava's new book, I Fear My Pain Interests You—a thrill of another kind. The book will be released on Sept. 27th. You can pre-order, and read all about LaCava in my interview with her at the Brooklyn Rail--LINK to Rail. And while you're there, you might enjoy my interview with Jerry Stahl for Nein, Nein, Nein!: One Man's Tale of Depression, Psychic Torment, and a Bus Tour of the Holocaust--LINK to Rail.

Speaking of books, I haven’t posted since late 2021 during the tour for Peter and the Wolves and Why Labelle Matters. During the autumn months I'll be recording audio books for both. The book tour was wonderful. So good to meet up with east coast people I adore, whose presence in my life is missed. And so much has happened since. I was honored by the Library of Congress to write the entry for Labelle's recording of "Lady Marmalade". Peter and the Wolves sold out of its first printing, and publisher Frank Mauceri has closed his label Smog Veil, after doing justice to the unsung heroes of Cleveland's music scene. Grateful to report Why Labelle Matters was a finalist in the Biography/Memoir category for the 2021 Lambda Literary Awards. And I have a surprise to unveil in March of 2023.

For now, please check out the new song on YouTube, Spotify, and Apple Music/iTunes store! First solo recording in 34 years. Yes, I am an ancient dragon-slayer. We're a mere two months away from the midterm elections in the USA and many of you may feel , as I do, the last 6 years or so has been a national experiment in terror. With so much in the balance, I felt it imperative to finish and release a song I’ve been working on for several years. The song is called “American Elegy”. Scott Bruzenak contributed music and also produced the track as Noisecastle III. (Bravo, Scott.) No spoilers... please listen. Maybe I'm bringing a knife (in my case, a dagger) to a gun fight but hey, I'm quite agile and have dodged a few bullets in my lifetime. Kung fu classes are back on the agenda—Shaolin-style—thanks to a nudge from the extraordinary Everything Everywhere All At Once. Brilliant film. I've been a fan of Michelle Yeoh forever and was overjoyed to see her showcased in all her stunning glory. And Jamie Lee Curtis! Comedy gold! Even when she appeared in deep background nearly obscured by a crowd, my face broke with laughter.

I self-released because what record company is going to jump at promoting a protest anthem, or even consider signing an 'older woman', with ageism so culturally omnipresent?  A friend and radio insider told me public radio will never play the song—they are under severe scrutiny. Playing this song would mean having to play some nouveau Nazi anthem. My God, the false equivalence. How did we get here? There's also  the warped view of the industry that boomers  don't support their own demographic when it comes to music. (Giovenezza! I'll explain this in a moment.) Of course, we're too old to enjoy music. Jesus Baal.

I have stories to reveal about  the music business, and although I wasn't exactly an angel, most of my bad behavior (some of it true, much of it spurious) was a reaction to record biz misogyny. To start, there was  the punishing baggage of having been born a woman (sexism, harassment, bullyish attempts at control, a #metoo incident). Then it was homophobia and one frightening physical threat by a bully of a manager (not mine). Being out as a singer in the late 80's and early '90s was not heard of.  You just did not do it. IMHO, it's why Whitney Houston imploded. Hollywood was no different and in many ways, still is. Anne Heche found out  when she fell for Ellen. And then finally, when you're ripe enough to be all out of fucks, ageism awaits with teeth bared. It's never ending. What has changed? I have. I do it for love now—could not continue allowing corporate jack-assery to keep me away from music. Thankfully people have uploaded my videos to Youtube, some of which I'd never have found otherwise. The companies who 'own' my past music have kept the recordings buried in a dead-letter zone... in part, due to this Wagnerian epic of a song I wrote and co-produced with Ian Prince, "Can't Stop the Dance", recorded for Chrysalis in 1987.
(I'm forever rewriting "Pirate Jenny"). The patriarchy didn't take kindly to this one.

My first solo album in three decades, Fantomette the King, is in the works, with "American Elegy" as its maiden single. The next four songs/recordings will drop in late 2022 as an EP.  Making music, living in the music, is joy. Is sacred ritual. Writing, too. I'm taking my time working on another book:  No New York, memoir #3. For those who enjoyed the previous books, the newest and first in a trilogy (Peter and the Wolves was #2) might be on shelves as soon as March, 2023.

And then, to fiction. Hopefully on kinder shores. Bowie the Starman sure knew where we were headed.

While working on Why Labelle Matters, research became such a high. The current research on our brutalist music of the late 1970s/early 80s has me circling back to Antonin Artaud's The Theater and Its Double and how the absence of a communal connection to creativity in American society is in stark contrast to his ideas about art. In the preface Artaud writes about Mexico, where
"...there is no art: things are made for use. And the world is in perpetual exaltation", reminding me of the exhuberant creative spirit of Trinidad and Tobago. The piece I wrote about the twin islands and their relationship to art, one so foreign to us, may be my first Substack entry. Am thinking of shifting these writings to Substack. Do people bother to visit artist's websites unless they're die-hard fans or looking for tour dates? I'm a bit lost as to where and what people visit in the digital universe these days. Who spends time on desktop sites? Is it all cellphone screens, and if so, must we deliver the bite-sized? Am guilty as the next here when it comes to the phone. My eyes have morphed astigmatic.


Here’s an update on current attention captures.
Doja Cat: Woman  (pop eye candy of the finest. QUEEN!)
This pro-choice anthem by MILCK: We Won't Go Back
Lizzo: About Damn Time
Betty Hutton: It Had To Be You
This, which brought me to Tears (for Fears!): Rivers of Mercy  on loop. thanks, Roland and Curt.
And the self-titled LP, Chaka, 1978

WATCH The Morning Show on Apple TV.  The writing! Near perfect in nuance, comprehension, and balance of #metoo, with stellar performances by everyone involved. When the women speak truth to power, the expressions on the men’s faces are priceless. A wee spoiler here. In season 2 episode 2, Steve Carrell’s character Mitch (the main perp of the series) is hiding out in Italy after being ‘cancelled’. He’s minding his own business at a café in Como when a young American ‘feminist’ brat approaches and attacks him with histrionic gusto. The wonderful Napolitano actress Valeria Golino comes to his defense, and when the brat admonishes her to 'look up feminism' and calls her Mussolini, Golino breaks into song: Mussolini’s fascist anthem “Giovenezza!” (translation: youth!).  Such brilliant writing. Golino exposes how she is pulling this attack for her 15 minutes on social media—brat-girl's friend sits at a nearby table capturing away on her cellphone. Golino delivers the coup de grâce: “...and by the way, I fought for your right to be an asshole, bitch. Don’t make me regret it!”

Other attention grabbers:
Chanting aum with Sadghuru   (vagus nerve toning and a great way to slide into meditation.)
Kripalu Yoga (gentle. strenuous yoga freaks me out.)
EMDR    (highly recommended for anyone suffering from PTSD.  Some practitioners use small hand-held buzzers,
preferable to the eye movements. EMDR proves how trauma lives in the body... and how it can be cleared.)

Books:
Kae Tempest — On Connection
Giannina Braschi — Empire of Dreams
George Saunders — A Swim in a Pond in the Rain
Lesley Blanch — The Wilder Shores of Love
Cecily Mackworth — The Destiny of Isabelle Eberhardt
Marsha Keith Schuchard — William Blake's Sexual Path to Spiritual Vision
Thomas Moore — Care of the Soul
Jason McBride — Eat Your Mind: The Radical Life and Work of Kathy Acker
(Yet to be released, it's the definitive bio on Acker. Leave it to an Irishman to get it right!
I'll be reviewing the book for the Brooklyn Rail's November issue.)

A quick parting word, courtesy Ursula Le Guin:
“The trouble is that we have a bad habit, encouraged by pedants and sophisticates,
of considering happiness as something rather stupid. Only pain is intellectual, only evil is interesting.
This is the treason of the artist: a refusal to admit the banality of evil and the terrible boredom of pain.”

And this from Toni Morrison:
“I just think goodness is more interesting. Evil is constant. You can think of different ways to murder people,
but you can do that at age five. You have to be an adult to consciously, deliberately be good – and that’s complicated.”

Until next time, stay safe.
Give and receive the love you desire.
And dance as much as possible!  💖 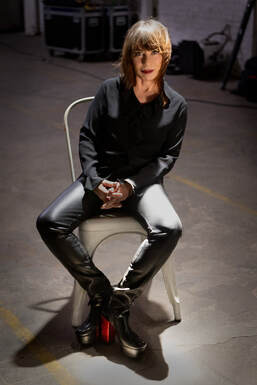