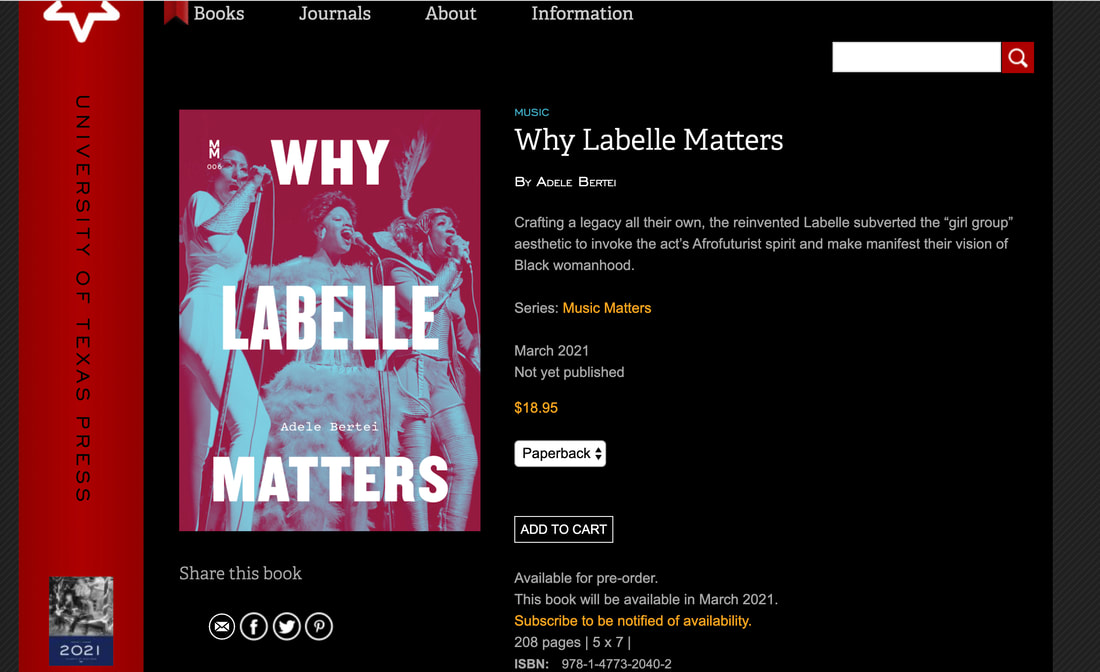 Praise for WHY LABELLE MATTERS
"Labelle was my first experience of women as iconic rock stars. Finally, here's a book that pays tribute to the true mothers of Afrofuturism."
—Lenny Kravitz, musician, actor,  producer

“Labelle changed how we look at women singers. No longer were they “girl groups.” They and we were all grown up. Voulez-vous coucher avec moi? You bet. This is the book that tells us how and why.”
—Nikki Giovanni, poet

"In this vivid prose marvel of a praise-song to her lifesaving, teen-fangirl crushes, Adele  Bertei deploys rock solid scholarship, granular musical analysis and piquant, personal revelation to transcendent and inspirational effect for an array of readers— those equally long-besmitten from a century past, and the post-millennial virgin-eared alike.
Bertei  exegetically and effusively narrates how the group's Sarah Dash, Nona Hendryx and Empress Patti Labelle (in tandem with far-sighted guiding light  manager Vicki Wickham), emerged in the 70s as a trio of soulful warrior queens whose legendary accomplishments now hold several pop pantheons on lock: that of the Great Black Music canon’s most spectacularly adorned space-funk fashion avatars, most hypersensual feminist icons, and most gender-radicalizing cohort of rock&roll hall of fame rebels. In Bertei, this audacious trifecta of harmonizing trailblazers have been gifted a trenchant, mythopoetic scribe worthy of essaying fiercely about Labelle’s reverberant spiritual depth, omniversal cultural significance, and  torch-bearing Black Futurist visionary status. All with a whole lotta love, wit, and witness-bearing  illumination."
— Greg Tate, author

"This is a marvelous scholarly account of the whole magnificent Labelle phenomenon by the multi-talented Adele Bertei.  The book registers the key place in pop culture of 'pyrotechnic gospel punk', encapsulating the excitement of the girl groups of the '60s and the glimmers of gay pop in Swinging London. Most of all it foregrounds the  place of Labelle in Afrofuturism. Bertei makes a bigger feminist space in music history for Nona Hendryx, Sarah Dash and Patti LaBelle than has been accorded them while also drawing on all the riches of Black diasporic cultural formations."
—Angela McRobbie, author and Professor Emeritus, Goldsmiths, University of London

"Few are better placed to explain why Patti Labelle, Nona Hendryx, and Sarah Dash matter than self-confessed “glitterbug androgyne” Bertei, who fell for Labelle at a wild 1975 show in her native Cleveland–and then survived New York’s turbid No Wave scene to tell the trio’s thrilling Afro-futurist-feminist story these many years later. It’s a smart, shrewd, joyful read–as piercing as any top C shriek from the woman who gave Labelle their name."
— Barney Hoskyns, author and editorial director, Rock's Back Pages