On Sound and (what) Matter(s)   I'm intrigued about sound's effect on matter. The conclusion of this piece will lead to my own (possibly crackpot) theory about SETI and their search for alien signals via the Kepler telescope scans (discontinued some time after I originally posted this article). If the tremendous implication of how sound affects matter tweaks your curiosity about why we are where we are in our evolution, come along with me to see if these ideas are worthy of your rumination.

It begins with my reading Tesla: Man Out of Time by Margaret Cheny. His bio led me to cymatics, the study of sound and its visible effects on matter, or the geometry of vibration. This in turn led to Solfeggio tones and their correspondence to Fibonacci numbers, to international concert pitch and its off-landing in 1955 and finally, to aliens and why they might be avoiding us. A nutty trajectory, but bear with me.

Let's begin with cymatics. Here are two great videos about how sound affects matter by David Icke and a TED talk by Evan Grant, which includes a great demonstration of a cymatic experiment you can do with your kids at home.  If you're interested, look for more links demonstrating how sound frequencies move sand particles, salt or liquids to create amazing patterns; geometric in the former, and surreal in the latter. If you want to try the experiment you see in the TED talk, you can do it with parts from a hardware store to a more sophisticated rig using Chladni plates and frequency/tone generators. All you need is a space where you can get a bit messy, and a video camera to record what you see. (Trust me, you'll want to record it.) An anglepoise light would be helpful, and a C-stand to fasten the camera to, so you can point the lens toward the plate in a direct overhead shot.

Another fun thing to do; download the six primary solfeggio tones to see how they 'look' in your experiment. (A quick internet search will yield results.) Play them as loops through iTunes by connecting your computer to a speaker. Mount the speaker beneath a Chladni plate, experiment with volume, and see what patterns each tone creates. In case you're wondering why it's called a Chladni plate, Ernst Chladni, a contemporary of Beethoven and the leading acoustician of his day, defined C=256 (which renders  A note as 432 herz) as the scientific tuning. 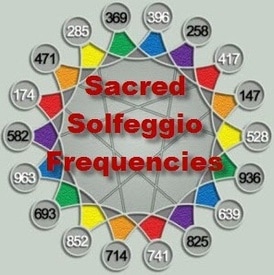 What are the Solfeggio tones?

The Solfeggio frequencies are six pure tonal notes once used to make up the ancient musical scale, until they were altered by the Catholic Church in the 5th and 6th centuries.  The Church claims they have "lost" 152 of the ancient Gregorian chants, but more than likely. they've been locked away in the bowels of the Vatican archives. It is said that the tones all have direct healing abilities. This begs inquiry. If in the beginning was the WORD, is sound, is vibration, isn't it everything? Science claims that all phenomena in the universe have a frequency. The Church loves to hide any knowledge that may prove liberating… and this idea of sound's effect on matter could be the key to many mysteries.  Could it be that all physical and psychic disturbances can be traced to frequencies (sound)? This is a revolutionary thought, and so simple that it either eludes the greatest of minds, or do they count on us remaining ingnorant of sound's power?
The six primary tones are (Latin names):

All of these tones reduce to a 3, a 6, or a 9, and the vibrations of
thirds, sixths, and ninths are extraordinarily powerful.
When tuning instruments to an A = 432hz,
the frequencies across all the other notes and octaves become divisible by 3.

Nicola Tesla: “If you only knew the magnificence of the 3, 6 and 9,
then you would hold a key to the universe”.

Now the only test to discover if these Solfeggio tones are truly healing,
or if their healing abilities are merely a myth and can be debunked,
is to measure their effect on matter. It seems reasonable to assume that if the tones create a
pattern that is geometrically harmonious and pleasing to the eye, its essence would be healing,
​and if the effect is a riot of disturbed chaos, may be not so healthy to the organism it's effecting.
Hence I recommend the Chladni plate experiment. See for yourself!

International concert pitch:
​A= 432 hz versus A = 440 hz
Today all orchestras and musicians around the world tune to a standard international pitch of A=440.  But it wasn't always 440. What happened?  Beginning with Bach  (who not only played organs but built them) in the 1700's, A = 432 was perfect tuning pitch for music. In 1815 Czar Alexander began messing with it and demanding the world's musicians follow suit. In the mid-1800's, the Romantic school of composers like Liszt and Wagner championed higher pitch. By 1850, pitch chaos was in full effect across Europe and in America.

This went on for a while until 1884, when Guiseppi Verdi worked to institutionalize A=432 in Italy. This began a movement of  operas in New York, France, and elsewhere in Europe maintaining pitches between A=432 to A=435 from then until WWII. A=432 became known as Verdi's pitch (in Italian, La Verdiano), a decidedly smoother pitch for opera singers, especially when transitioning from chest to head voice. A=432 hz is better, rounder, more colourful for singers, and corresponds with the Golden Ratio. A=440 hz is higher yet has a duller, dampened undertone harmonic, even though there is a certain brilliance in string and wind instrument tones.

Musical concert pitches continued to vary all over Europe until the 19th century, and as instrumental music became more popular, pitch levels continued to rise with players competing for a brighter, more brilliant sound. For an example of how higher pitches were not kind to the vocal chords of singers, hear the great baritone Piero Capullicci show us the difference in sonic colour:
Pitch around the world wobbles along like this (between A432 -A440) until the 1930's, and here's where it gets wonky. Enter Joseph Goebbels. In early 1939, Hitler's Minister of Propaganda, in concert with the British Standard Association organized a conference in London to standardize concert pitch to A=440 (what a surprise! this was Wagner's pitch). French and Italian composers were not invited. The Anglo-Nazi agreement didn't last after the war broke out, but a second congress in London met in 1953 to try and impose A=440 once again. It was never written into law exactly, but the International Org. for Standardization affirmed international pitch as A=440 in 1955, and to make a long and fluctuating story short, it remains so today.  :-(

Rudolf Steiner called A=440 "Luciferian" and claimed it responsible for discord on earth. Is it true that our shift to A=440 has possibly created an unhealthy effect on our consciousness? DNA oscillates to protect itself from stress. Could this change of 8hz affect the ability of our DNA to protect and regulate our genetic make-up?  Let's look at Fibonacci. The waters of our inner ear rely on Fibanocci spiral dampening through the seashell-like structure of the cochlea to keep our equilibrium centered and grounded. (See cochlea images on top of this page.) This Fibonacci spiral in our ears helps cancel out certain wave interference patterns in order to keep us balanced. When the inner ear is stressed, we can experience a type of fog, or feeling of being spaced-out. Truly all frequencies affect DNA and consciousness, which in turn affects awareness. If you change a frequency, you can change the perception of dimension.  For an explanation on the subject of Fibonacci in nature, click here.

Imagine if we were to use sound in the public arena to shift perception. We already do, for the most part, detrimentally  Think about the corporations who run the airwaves choosing to dish out, in heavy rotation, the most violent rap music, and how it may affect a community, as one example. Or our addiction to news, talking heads filling our ears with toxic stories creating fear. Here's a more benevolent use of music;  on trash pick-up day in Taiwan, people are lured out to the street with their bags of refuse by the sound of a tone-generated version of Beethoven's "Für Elise", played by the garbage trucks!

Let's take this idea of sound manipulation into the mysteries of monolithic architectures. I know it's a reach, from Taiwanese garbage to Giza and am jumping all over here... but I recently saw a program on the extraordinary churches of Lalibela in Ethiopia, which were excavated out of single pieces of granite. How could this be humanly possible? Imagine if you can make particles of sand move on a metal plate with one single source of sound, alone in a room, what does that imply if, for example, a civilization came together to move matter with sound?  Other architectural and inexplicable wonders like Giza, Teotihuacan... could they have been created with sound? Can it be this simple and yet we've completely missed it?

Imagine sound is not a wave, but a bubble. Then imagine if you will, a being of an alien race completely attuned to sound, coming into the stratosphere of the earth's sound bubble, or should we say toxic noise bubble. If I were an alien I'd flee in horror! Multiply the sound of one noisy household with its family members on cellphones, ringtones, music, news broadcasts, TV, the hum of refrigerators and microwave devices, etc., or the noises of one urban avenue at prime-'noise'-time, then multiply that by megalithic zillions and imagine the toxic density of the sound bubble around the earth's atmosphere. I get vertigo just thinking about it. Hence my theory, that SETI will never establish contact with aliens. Any intelligent life out there would be repelled by our collective sound, and the fact that we've been completely ignorant about how to use sound to our best advantage, toward our higher evolution, for aeons.

We make choices. About what we listen to, about the sounds we emit and create. All of it. For the better. But it takes INTENTION. We collectively hold realities into being and sustain these beliefs  with our thoughts, into words, into sound.
​
What is the sound of America today? What are we holding in our thoughts?
WHO AND WHAT HAS COLONIZED OUR MINDS THROUGH OUR HEARING?
Remember that Gregorian chant I spoke of earlier, once lost, now found?
The one featuring all six primary Solfeggio notes?

So that your servants may resound
the miracles of your creations
with loosened vocal cords,
wash the guilt from our lips,
Saint John.

I'll leave you with a recording of UT QUEANT LAXIS, the six Solfeggio notes in action.