Praise for Peter and the Wolves
"Peter Laughner (Pere Ubu) was a secret inventor of punk rock, a dazzling songwriter and guitarist who should
by all rights have become a star. But he died suddenly, in the crucial year 1977, and instead became a ghost,
haunting the corridors of rock and roll. Adele Bertei's tender evocation restores him to flickering life, and her
account of the complex education he gave her is inspiring and sobering at once.”
— Luc Sante

“Much has been written about the punk scenes of New York, London, and LA. Adele Bertei inks 1970s
Cleveland, where burning water provided an existential backdrop to a demimonde centered around the
doomed, charismatic figure of her friend and band mate Peter Laughner. Peter and the Wolves is a Just Kids of
the heartland, with Bertei a poète maudit as in love with rock’n’roll as her hero Patti Smith.”
— Evelyn McDonnell

"Adele Bertei's Peter and the Wolves is a heart-rending, fascinating and occasionally hysterical memoir about
her time with Pere Ubu's Peter Laughner, the real founder of Punk Rock. Bertei’s story of the time they spent
together, and the unsentimental education Laughner bequeathed her, stands out as a classic of the genre.
Her prose is at once unsparing and lush, and never less than riveting. With a visionary's eye and the grace of a
poet, she brings this unsung, unlucky genius back to life. No reader will walk away unaffected from this
personal, devastating, and ultimately inspiring masterpiece."
— Jerry Stahl

“Adele Bertei is seriously brave and seemingly unafraid. What she has given us is a memoir of music and loss, a
story of legendary Cleveland musician Peter Laughner, of Pere Ubu and Rocket From the Tombs, who died at
24 in 1977. Laughner’s most successful lyric, “Ain’t it fun when you know you’re gonna die young” is the
soundtrack. Peter and the Wolves is the recounting of that trajectory. Painful, tender, naked, and yes, brave.”
— Dorothy Allison

“Adele Bertei's elegy for Peter Laughner evokes the lost world of rock and roll bohemia with heartbreaking
clarity, a recreation so vivid I felt like I had actually traveled back in time.”
— Mary Harron
​
“Midwestern 1970s punk was a true scene, largely undocumented. Adele Bertei gives us that story, drenched in
the power of music to bring us our people, and the power of those people to change our lives.”
— Michelle Tea

"Out of the raging heart of Adele Bertei, lone wolf Clevelander from the 70s falling in and out of reform schools
and dealing with 14-year-old madness of psychopathic American experience, who later ran to NYC to
become this amazing creature on stage banging the keys with the original Contortions, the most demonic and
savage no wave misfit ensemble to soundtrack the fucked up streets of NYC, comes Peter and the Wolves
(Adele Bertei hc), a long gestating, touching and tear-swallowing memoir of her time as Peter’s roommate,
speed-snorting buddy and young kid dyke discovering EVERYTHING that makes this Disneyland dementia worth
buying stereo equipment and bookshelves for. No matter how lost the most lost heart in rock and roll can drop,
there is an angel of transmission passing the fever of ecstatic rebel glory on to whomever has the magic. We
hear Peter recognizing Adele’s strum, her vocal sweetness on stage kicking real deal rock and roll ass and
inviting her IN. This is a book of love… all emanating from a strange and deliciously damaged encounter with
the incendiary light of Peter Laughner, an America genius of the rock and roll heart."
— Thurston Moore & Byron Coley
COMING SOON FROM THE UNIVERSITY OF TEXAS PRESS,
MARCH 2021
WHY LABELLE MATTERS 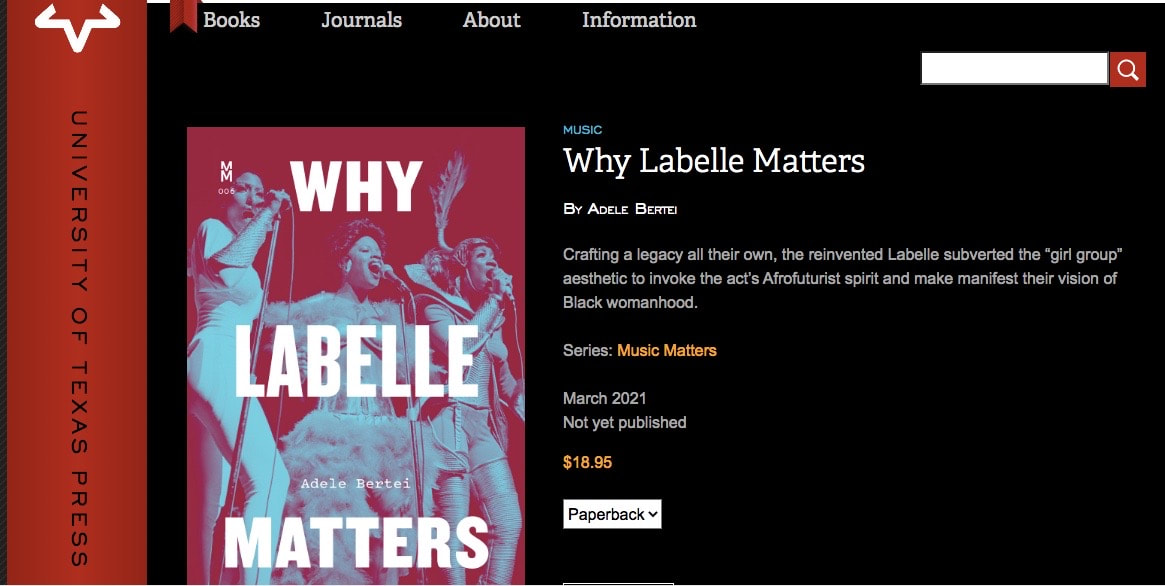